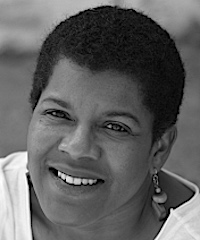 Tananarive Priscilla Due is an American author and educator. She is best known as a film historian with expertise in Black horror.

Due teaches a course at UCLA called "The Sunken Place: Racism, Survival and the Black Horror Aesthetic", which focuses on the Jordan Peele film Get Out. Due was working as a journalist and columnist for the Miami Herald when she wrote her first novel, The Between, in 1995. This, like many of her subsequent books, was part of the supernatural genre. Due has also written The Black Rose, historical fiction about Madam C. J. Walker (based in part on research conducted by Alex Haley before his death) and Freedom in the Family, a non-fiction work about the civil rights struggle. She also was one of the contributors to the humor novel Naked Came the Manatee, in which various Miami-area authors each contributed chapters to a mystery/thriller parody. Due is also the author of the African Immortals novel series and the Tennyson Hardwick novels. Due is a member of the affiliate faculty in the creative writing MFA program at Antioch University Los Angeles and is also an endowed Cosby chair in the humanities at Spelman College in Atlanta. She developed a course at UCLA called "The Sunken Place: Racism, Survival And The Black Horror Aesthetic," after the release of the 2017 film Get Out. The first course went viral and included a visit from Peele. Due was featured in the 2019 documentary film Horror Noire: A History of Black Horror, produced by Shudder.