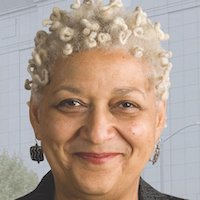 Jewelle Gomez is an American author, poet, critic and playwright.

She lived in New York City for 22 years, working in public television, theater, as well as philanthropy, before relocating to the West Coast. Her writing—fiction, poetry, essays and cultural criticism—has appeared in a wide variety of outlets, both feminist and mainstream. Her work centers on women's experiences, particularly those of LGBTQ women of color. She has been interviewed for several documentaries focused on LGBT rights and culture.

Describing herself as a possible "foremother of Afrofuturism," Gomez is the author of seven books, including the double Lambda Literary Award-winning novel The Gilda Stories (Firebrand Books, 1991) . This novel has been in print since 1991 and reframes traditional vampire mythology by taking a lesbian feminist perspective; it is an adventure about an escaped slave who comes of age over two hundred years. According to scholar Elyce Rae Helford, "Each stage of Gilda's personal voyage is also a study of life as part of multiple communities, all at the margins of mainstream white middle-class America."