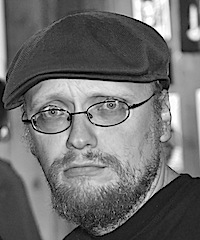 He holds a MS and PhD in Library and Information Sciences from the University of Illinois at Urbana-Champaign, where he teaches courses on computers & culture, and social media & global change. His many publications range from academic essays (in comics form) on new media & learning, to art books about underrepresentation in comics culture, to editorial comics, to a graphic novel adaptation of Kindred by Octavia E. Butler, with his J2D2 Arts counterpart John Jennings. Kindred: A graphic novel adaptation (Abrams ComicArts) was awarded the 2017 Bram Stoker Award for Superior Achievement in a Graphic Novel, and the 2018 Eisner Comics Award for Best Adaptation From Another Medium. The co-editor of the Black Comix Returns art book from the Magnetic Collection at Lion Forge Comics, Damian has given talks and lead workshops about comics, art, and education internationally. His most recent TV appearance was on AMC’s Robert Kirkman’s Secret History of Comics.