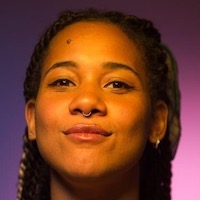 Che Grayson is a filmmaker, writer and TED speaker. Her award-winning films have shown internationally, and her writing has been published by Teen Vogue, Image Comics and IDW Publishing.

Che grew up with her mothers, little brother and two dogs, Trinity and Neo; spending most of her time watching black-and-white films and 80s horror flicks. She went to Tufts University, receiving her Bachelors in English Literature and Media Studies. While at Tufts, her documentary photography work in places that include Vietnam, Arizona and the Pine Ridge Reservation sparked her passion for storytelling.

Che earned her MFA from New York University’s Graduate Film Program, with a concentration on writing and directing. She has written, directed and produced shorts, commercials and pilots while studying under the mentorship of Spike Lee and Kasi Lemmons. Che is a 2016 TED resident, a 2017 IFP Marcie Bloom Film Fellow with Sony Picture Classics and most recently finished shadowing a TV director on an episode of 9-1-1 for FOX as part of Ryan Murphy’s Half Initiative Mentee Program. Currently Che is developing a series for TV, Magic Hour, starring Indya Moore (POSE). The pilot episode for Magic Hour, which she wrote and directed, is currently in post-production.

Che’s love of superheroes inspired her to create and self-publish her own comic book series, Rigamo, about a young Black girl who discovers that her tears bring people back to life. This was the inspiration behind her 2016 TED Talk “The Superhero We Need.” She is also the creator of an animated series, Scatter Brains, a psychedelic space odyssey, currently in development.

When she’s not writing or filming you will likely find her stuffing her face with her homemade pies, with her nose stuck in an Octavia Butler or Haruki Murakami novel, cuddled next to her Australian shepherd, Miyazaki.