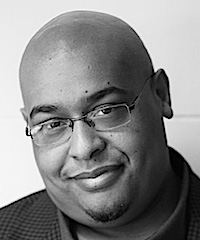 Brandon M. Easton is a professional writer, screenwriter, and educator based in Los Angeles, California. Easton was born in Baltimore, Maryland and resides in Southern California.

Easton is mainly known for his work on the Warner Bros. Animation reboot of the ThunderCats series as well as critical acclaim for his work in the comic book industry. Easton is a recipient of the 2015 Disney-ABC Writing Program, a one year program that is considered to be one of the most successful writer programs in the entertainment industry. Easton was a 2014 nominee for the Eisner Comic Industry Award for Best Single Issue or One Shot, which is considered the Comic Industry's equivalent of the Oscar Academy Awards. Easton also received three GLYPH awards in 2014 from the East Coast Black Age of Comics, including Fan Award (WATSON AND HOLMES #6), Story of the Year (WATSON AND HOLMES #6), and Best Writer (WATSON AND HOLMES #6). Easton is also the recipient of the 2013 Glyph recipient for Best Writer for his original graphic novel Shadowlaw. Easton was also a semi-finalist with the Hollywood Black Film Festival's Project Stargazer in 2013 – collaboration with NASA to find and develop science-fiction writers of color.