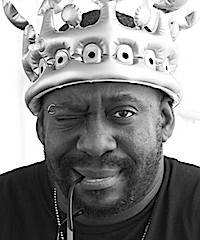 Ayize Jama-Everett is an African-American science fiction and speculative fiction writer, as well as a practicing therapist.

In his review of The Entropy of Bones, the writer Charles Yu describes Jama-Everett's work as "resist[ing] easy categorization. [The protagonist's] mixed racial background offers a potentially nuanced look from a perspective that seems underserved." He goes on to say: "If the book veers among different approaches — now a philosophical kung fu master story, now a seduction into a rarefied subculture, now an esoteric universe made from liner notes and the journal entries of a brilliantly imaginative teenager — there’s nevertheless a vitality to the voice and a weirdness that, while not always controlled or intentional, is highly appealing for just that reason." Jama-Everett himself sees his writing as a way to heal people who have long been ignored in mainstream popular culture. He asserts: “There’s a big wound in not being seen, in having your reality not being represented in any way.”

In 2021, Jama-Everett, collaborating with writer/illustrator John Jennings, published Box of Bones, an ethno-gothic horror comic. "A genre narrative rooted in collective trauma, with rotating artists. [...] This spirited project is part of the trend of ethno-gothic fiction in the comics market, and offers a landscape ripe to contemplate such spooky and strange fruit."