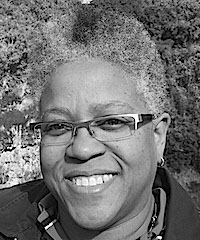 Ajuan Maria Mance is an American visual artist, author, editor, and a Professor of English at Mills College in Oakland, California.

Mance may be best known as the creator of the portrait series 1001 Black Men,[6][7] a project which took her six years to complete.[8] She is the creator of a number of zines[9] including Gender Studies, The Little Book of Big, Black Bears, and A Blues for Black Santa.[10] She also is an author and editor of scholarly books including Inventing black women: African American women poets and self-representation, 1877-2000 and Proud Legacy: The Colored Schools of Malvern, Arkansas and the Community that Made Them, the editor of the anthology Before There Was Harlem: An Anthology of African American Literature from the Long Nineteenth Century. Like her art, her scholarship explores the relationship between race, gender, and representation, specifically as it applies to African Americans. Ajuan is partly inspired by her teaching and research in U.S. Black literature and history. Her "The Ancestors' Jubilee" series shown at The Black Women is God 2017 exhibition imagines if our Black women ancestors checked in on the progress of Black women today.

Mance says her comics-inspired style is intended to make her "art as accessible as possible" and is based on stained glass: "When I first started drawing I thought, I’m gonna do this like stained glass. I’m going to have a heavy black line, very few planes, with a very limited color palette and different shades of the same color, but still evocative. So people say, 'Oh, this is like Picasso, or an African mask…' and all of that is true, but what I was really thinking about? I was thinking a lot about stained glass."

Mance was a judge for Prism Comics and Queer Comics Expo's Inaugural Prism Awards for representations of LGBTQAI+ characters in comics.