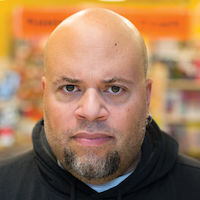 He is the co-writer and co-creator of NAOMI (DC Comics), which has turned into an upcoming series direcged by Ava Duvernay, and the Eisner Award-winning BITTER ROOT (Image Comics), a planned Legendary Pictures feature film to be produced by Ryan and Zinzi Coogler.
He is the author of the graphic novel THE LIFE OF FREDERICK DOUGLASS (Ten Speed). His other comic book credits include POWER MAN & IRON FIST, NIGHTHAWK, and OCCUPY AVENGERS (Marvel), CYBORG (DC), SHAFT (DYNAMITE), PLANET OF THE APES (Boom), THE ARMY OF DR. MOREAU (IDW/Monkeybrain), and NUMBER 13 (Dark Horse Comics). He is the author of SHAFT'S REVENGE, the first new novel starring John Shaft in over 40 years. He has also ventured into the world of Young Adult fiction with SUPER JUSTICE FORCE, the critically acclaimed first book in The Adventures of Darius Logan.