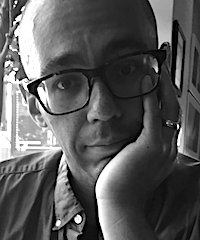 Victor LaValle is an American author. He is the author of a short-story collection, Slapboxing with Jesus and four novels, The Ecstatic, Big Machine, The Devil in Silver, and The Changeling.

LaValle writes fiction primarily, though he has also written essays and book reviews for GQ, Essence Magazine, The Fader, and The Washington Post, among others.

Slapboxing with Jesus was published in 1999 by Vintage Books. The eleven interconnected stories deal mostly with the lives of young black and Latino men living in New York in the 1970s and 1980s. The collection went on to receive wide critical praise. It won the author a PEN Open Book Award and the Key to Jamaica, Queens.

The Ecstatic was published in 2002 by Crown Publishing Group. The novel continues the story of Anthony James, a character from LaValle's collection of stories. Anthony is a morbidly obese college dropout who may also be experiencing the first signs of schizophrenia. The novel follows the exploits of his family, who are trying their best to save Anthony, but who might be in need of a little saving themselves. The subject matter is dark, and even shocking, but a gallows humor runs throughout. This book received even wider critical acclaim, earning comparisons to writers such as Ken Kesey, Chester Himes, and John Kennedy Toole. In 2003 the novel was a finalist for both the PEN/Faulkner Award for Fiction and the Hurston-Wright Legacy Award. It became a favorite novel for rapper Mos Def, who later titled his 2009 studio album after it.

Big Machine was published in 2009 by Spiegel & Grau. The novel tells the story of Ricky Rice, an ex-junkie survivor of a suicide cult whose life is changed when a mysterious letter arrives summoning him to a remote compound in Vermont. The novel was widely praised upon its release, making many national top ten lists. It also won the Shirley Jackson Award for Best Novel in 2009, as well as the Ernest J. Gaines Award for Literary Excellence and an American Book Award in 2010.

The Devil in Silver published by Spiegel & Grau August 21, 2012, is the story of Pepper, a sane man sent for observation to a mental hospital. There he encounters a monster roaming the nighttime halls. He teams up with some of the other inmates to fight the mental confusion of the drugs he is required to take, the staff, and the monster.

The Ballad of Black Tom, a novella, was published by Tor Books on February 16, 2016. It is a retelling of the H. P. Lovecraft story "The Horror at Red Hook" from the point of view of a young black man living in Harlem with a reference to the Nation of Gods and Earths.

Destroyer, a graphic novel published in 2017 by Boom! Studios, is a modern retelling of Frankenstein. The story follows an African-American descendant of Dr. Frankenstein, her only son who was killed in a police encounter, and the monster from the original novel who has long given up on peace.